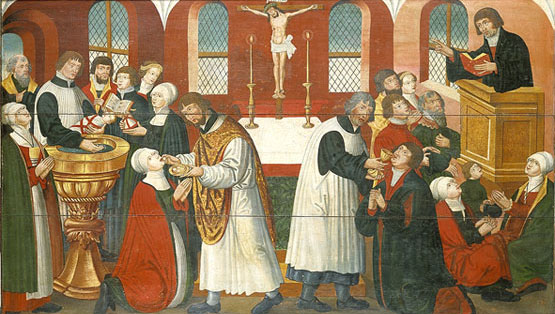 Robert W. Jenson, in the third chapter of his small booklet Lutheran Slogans: Use and Abuse, talks about the misconception and confusion brought about by the slogan “faith alone”. Just how are we saved by faith alone? Or to put another way, what is it about faith that is so effective in saving man?

Jenson explains that faith, according to the classical Protestant accounts, justifies “because God credits the fruits of Jesus’ atoning work to those in whom he finds faith. Despite what God sees when he looks at us sinners, he for Christ’s sake judicially declares us righteous” (p 17). At the end of his chapter, Jenson ultimately finds this conception of justification lacking. In fact he calls it an “arbitrary” decree (p 21)!

In any case, he expounds on Luther’s own understanding of just how faith saves from his classic work The Freedom of the Christian. Jenson expounds two ways in which Luther understood that faith makes the sinner just, righteous, “saved”:

The first. Luther observes that believing in someone is the highest honor we can bring him. Therefore believing in God just is fulfillment of the first table of the commandments. And as ecumenical theology has always supposed, obeying the second table is the natural result of obeying the first, however slowly or with however many setbacks this may take place. If we trust God, we will seek to fulfill his stated will (p 18)

As Luther says in his Small Catechism, fulfilling the first commandment is very simply “trusting…God above all other things”. That, according to Luther, is the essence of faith: trusting God, placing your security in him, finding your ultimate source in him. In this way, to have faith in Christ is itself a righteous act, presumably brought about by the Spirit. And thus we are righteous by faith.

Second, Luther expounds upon an Aristotelian principle: “for Aristotle, seeing was the chief channel of openness to reality; therefore, so far as my subjectivity is concerned, I become what I see” (p 19). Luther took this concept, but applied it to the hearing of the gospel. Jenson explains:

[Luther] regarded hearing rather than seeing as the dominating way by which in this life we are opened to an other. According to Luther… I become what is addressed to me, what I must hearken to.

Therefore, if what we attend to is the word of God, we are merely thereby shaped by the Word’s content. Hearkening to the Word, we are constituted as persons by the good things the Word communicates, peace and love and righteousness and so on…[Thus], when Jones is grasped by the gospel, “Jones is righteous” is straightforwardly true… (p 19)

The adage “you become what you eat” might well be termed “you become what you hear” in Luther’s understanding. If we hear the word of the gospel, that gospel makes its way into us and thereby transforms us. Jenson takes one last step however. Because, according to John and other biblical writers, the ultimate word of God is the Word of God. Put another way, the fullest form of the gospel is the person of Christ himself. To grasp the gospel is to grasp Christ himself. Therefore, hearing and being grasped by the gospel is, for Luther, to be grasped by Christ himself, to be in vital union with his person. “Thus Luther made it a principle of his theology: ‘In such faith Christ is present’. Faith makes us personally and actually righteous because faith is a transforming and ruling presence in us of the righteous one himself” (p 20).

Just as an aside, this is why Luther was quite emphatic about the real presence of Christ in the Eucharist. The sacrament of the Supper is nothing else than a verbal word of promise, and where the promise of the gospel is, there also, is Christ. Thus, he is right there on every altar wherever the Eucharist is practiced; and he’s there whether we realize it or not.

In any case, Luther understood that by grasping the promise of the gospel in faith, one was grasping none other than Christ, and this personal union of Christ and the believer was thus real and transformative: it made the believer really and truly righteous.

Jenson closes this chapter, as I have already noted, by stating that justification by faith as a bare declaration is simply not enough to get to the heart of this doctrine:

The alternative theory of justification, as sheer decree by the divine Judge “in the forum of heaven”, for all the genius that has been devoted to its plausible defense, cannot finally be rescued from making God’s justifying seem arbitrary” (p 21)

While I’m not sure I would go that far, I do agree with him that Luther’s own understanding of faith as involving a transformative union with the person of Christ is central to his teaching. We are justified not simply by divine decree, but by grasping Christ himself. We find our righteousness in none other than the righteousness of Christ himself!

2 thoughts on “Justified by Faith: What Does it Mean?”