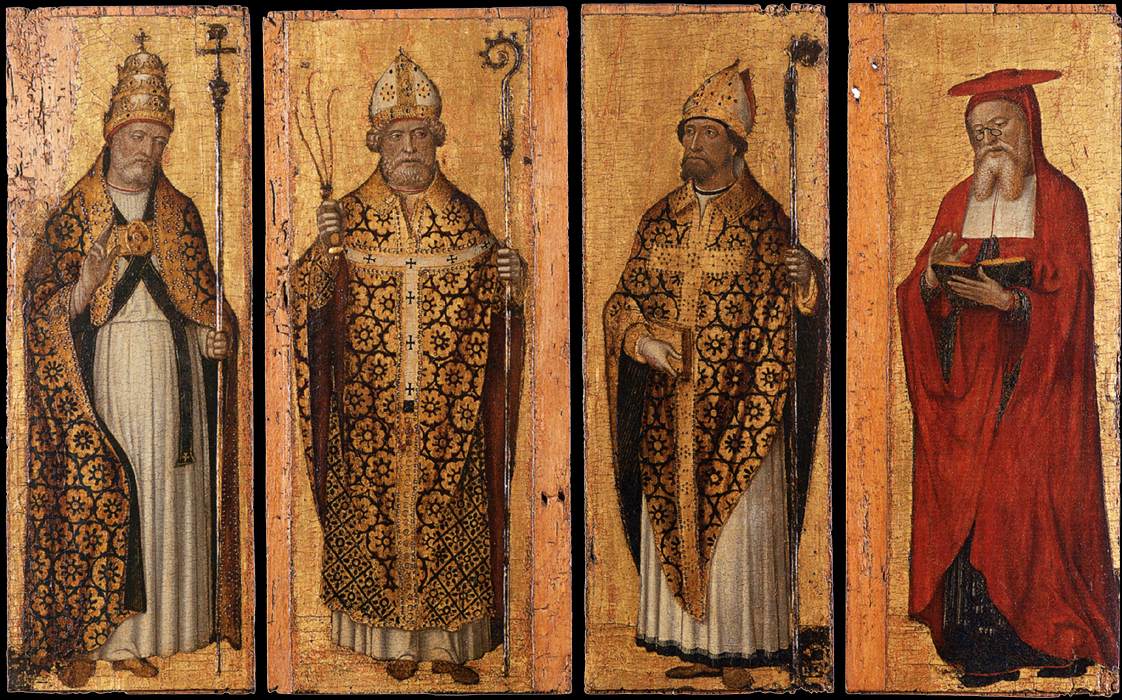 (Above, early fathers of the church: Bishops Ambrose of Milan, John Chrysostom of Constantinople, Jerome of Italy, and Augustine of Hippo)

My church says the Apostles’ Creed every week. We all say it together. We all affirm the truths communicated therein. But why say the creed? Why recite it? Why even affirm it? Why is an old creed important anyways?

Allister McGrath, in his Historical Theology, explains the large importance of the early creeds:

The English word “creed” derives from the Latin word credo, “I believe”, with which the Apostles’ Creed — probably the most familiar of the creeds — begins: “I believe in God…” It has come to refer to a statement of faith, summarizing the main points of Christian belief, which is common to all Christians. For this reason, the term “creed” is never applied to statements of faith associated with specific denominations. These latter are often referred to as “confessions”. A “confession” pertains to a denomination, and includes specific beliefs and emphases relating to that denomination; a “creed” pertains to the entire Christian church, and includes nothing more and nothing less than a statement of beliefs which every Christian ought to be able to accept and be bound by. A “creed” has come to be recognized as a concise, formal, and universally accepted and authorized statement of the main points of Christian faith. (p 29)

A “creed”, historically and within the early church, is that which every Christian needs to believe in order to be considered Christian. Confessions, which emerged later, are documents which highlight specific beliefs to a denomination, rather than the entire church.

McGrath explains how the creeds functioned in the early church:

The patristic period saw two creeds coming to be treated with particular authority and respect throughout the church (Apostles’ and Nicene Creeds). The stimulus to their development appears to have been the felt need to provide a convenient summary of Christian faith suitable for public occasions, of which perhaps the most important was baptism. The early church tended to baptize its converts on Easter Day, using the period of Lent as a time of preparation and instruction for this moment of public declaration of faith and commitment. An essential requirement was that each convert who wished to be baptized should declare his or her public faith. It seems that creeds began to emerge as a uniform declaration of faith which converts could use on such occasions. (ibid)

Unfortunately, many look to these creeds as mere denominational confessions that can be accepted or rejected. Actually, and historically, these are not optional! They were formulated ecumenically, by the church at that time, as universal statements about Christianity.

With this in mind, let us affirm with the early church fathers, the truths of the historic creeds.