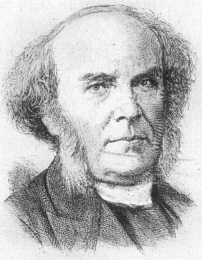 Reformed theology has always posited that God’s purpose in creating the universe was not out of necessity. What I mean is that God never had to create the universe. There wasn’t something missing within him that necessitated a creation. Paul affirms this in Acts 17:4, that “God is not served by human hands, as if he needed anything“. Within his own being then, God is completely free and independent.

So then, the question that has plagued many: why then did God create the universe? Horatius Bonar answers this question rightly I believe. He explains God’s purpose as revelatory, or expressive. Namely, that God created all things for the display of his own glory. God, in an overflow of his triune being, desired to create a world in which he could express the fullness of his attributes.

God’s purpose…is self-manifestation, or self-revelation. It is to bear testimony to His own character. Creation in every form, animate or inanimate, is God’s witness; the utterance of His mind and heart. His design is not merely to make known that He is, but what he is; to exhibit Himself the I AM, the Being of beings, in whom all being is wrapped up, and from whom all forms of being spring; to unbosom and reveal Himself fully and perfectly; not partially and in glimpses, but completely and abidingly; by bringing forth into view and making visible all that is glorious, as well as all that is gracious, in the infinite and invisible Godhead. God does not create a world simply because he can do so, and wishes to put forth his power, but because he desires to bring out to view those riches of his own being and character which had otherwise been hidden. Again, God did not create this earth of ours a fair and happy world at first simply because he loved to see a fair world inhabited by happy creatures, but because, in that beauty and blessedness, his own character was most fully revealed, and his own glory most brightly reflected.

… This earth… is [God’s special place of self-manifestation]. It is here that this process is going on just now, and it is here that preparations are making for larger and brighter scenes of self-manifestation than eye hath yet seen or ear hath heard… The work is still advancing; the plan is not yet consummated; but the rudiments of it lie all before us; the stones of the fabric lie scattered around; and prophecy unfolds to us much regarding the coming consummation, and presents to us in no faint colors the picture of the glorious reality which from the beginning God has had in view, and which shall, before long, be given to the gaze of the universe, as God’s own perfect representation of himself.

… The purpose of self-manifestation develops itself chiefly in connexion with two great events, the first and second advents of Christ. Round these two points all other events cluster. From these two foci all light is radiating, and round them all events revolve. It is only by keeping our eye on these that we can understand the mighty scheme, and enter into the mind of God respecting it, giving to each event its proper place, order, connexion, and value.

Wow. I love this quote. God’s purpose is self-manifestation. It is the demonstration of his glory, or his attributes. Bonar goes on in this third chapter from Prophetical Landmarks to focus on the two advents, and how all of God’s attributes are demonstrated through Jesus’ death/resurrection and second coming. I agree with him, and think Paul does too. God’s purpose is for “the praise of his glorious grace” (Eph 1:6), which is “set forth in Christ as a plan for the fullness of time, to unite all things in him, things in heaven and things on earth” (Eph 1:9b-10).